It has to be one of the most famous, iconic, well known and loved SLR camera ever made — the 1964 Pentax Spotmatic. Affectionately known in today’s online communities as the “Spotty,” it has a cult following as well as  being the official camera of all four Beatles (particularly Ringo Starr). 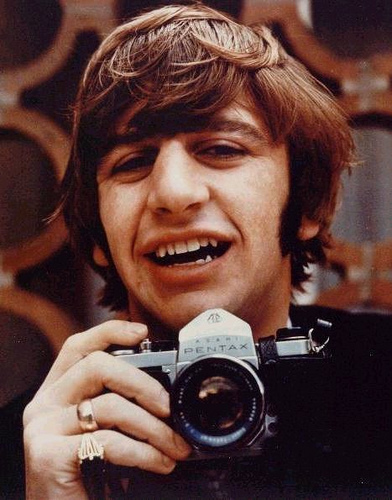 The unit I have was purchased by my father in the 60’s while serving in the military.

The first thing that a person used to newer digital cameras and for that matter film cameras from the 1990’s and early 2000s is will immediately is the weight – just shy of two pounds (or 868 grams) with a standard lens attached, such as its included Super Takumar 55mm lens.  Certainly a stark contrast to the mostly plastic feather light Canon EOS bodies of modern times that weigh in around 12 ounces.

The second thing a modern photo enthusiast will notice is the lack of anything at all automatic. You do the focusing, you pick the aperture and you pick the shutter speed,  There is a light meter – but it won’t pick the proper ISO (called ASA back then) for you.  There is no motorized film advance – you use a lever and you advance your film each and every frame.  No rewind either – you hit the button, you turn the crank.

Lastly, the M42 (aka “screw-mount”) lens system – rather than just a twist, the lenses are threaded and must be screwed in.

The factory-included Super-Takumar 55mm f/1.8 lens is said by some to be sharper than Leica.  Unless I win the lottery, I’ll never find that out because I am just not made up of that kind of money.  As I have no direct hands on experience with Leica products (other than my wife’s Panasonic digital camera, which has a clearly labeled Leica lens in it that probably makes every photo buff swoon), I can’t comment either way.  But it is razor sharp when focused properly, many times better than the Canon zoom lenses of the newer gear that I owned before inheriting this.

I only ran into one snag while shooting with it – the mirror jammed.  Considering the camera was marketed in 1964 and it is now 2018, a problem like that really isn’t bad for a camera that is over 50 years old. A quick search of YouTube revealed a fix – remove the bottom cover and lubricate the sprocket, shown below just to the right of the tripod mount below the “L” shaped lever, liberally with some suitable petroleum product.  I did that, and it’s now good as new.

Loading film in this camera is actually kind of a pain.  To get it loaded, you must firmly insert the film “tongue” into a slot on the far right, and then advance the film.  The problem I kept running in to is I couldn’t get the “tongue” to stay in, so I’d advance it and the film would come on.  After a bit of practice I managed to get past that.  Being used to the “auto-load” feature of canon cameras where you literally just pull the film out and close the lid, this caught me off guard.

The camera is identical in almost every way to the revered K1000 model of 1976, which has a tremendous cult following of its own online, with the exception of the K1000 not having a self timer and using he newer style K-mount, aka the “bayonet” mount.  Also the K1000 has automatic metering with the lens wide open, unlike the Spotmatic in which the aperture is set and then closed when you push the button to activate the meter.  This is nice if you wish to preview depth of field, but in truth it’s more of a pain because if a small aperture is being used, you can hardly see anything in the view finder.

In terms of usability, the fact that it’s fully manual is daunting, though in reality it’s quite easy to use.  One knob for the shutter speed, and adjust your aperture ring.  That’s all there is to it. Considering the ridiculously long list of different modes and features and menu options and buttons on both modern Canon, Nikon, and for that matter modern Ricoh/Pentax cameras, this is actually quite amazing. The beauty of this camera is that it’s not automatic and it doesn’t need to be. It also does not have a hot shoe, so a flash must be plugged in one of the ports on the front.  Flashes and I don’t get along anyway and I rarely need or want a flash.

The images that this thing produces are astounding – mainly attributed to the extreme high quality of the lens.  This camera can be found for next to nothing on eBay or even used on Amazon as well.  If you’re getting in to film photography and you’re looking for a good camera to do it with, this is one to consider, especially with the plethora of used (and very expensive in the past) M42 lenses available that are also priced next to nothing on eBay.

Feedback? I would love to see some.  Also, share some of your experiences in the comments as well.