Follow Adventures of a Photo Nerd on WordPress.com
Posted on January 11, 2018November 13, 2018 by Chris Moore

Along with the Spotmatic, I also inherited this Pentax MV body equipped with an absolutely gorgeous  SMC Pentax-M f/1.7 50mm lens.  The story behind this camera is that my dad purchased this for my mother in the early 80’s (the camera itself came to market in 1979) so that she could easily photograph my brother and I, both of which were pretty little at that time.  Since it is an aperture-priority camera, there’s no need to worry about shutter speed.  Just focus it, adjust your aperture ring, press down the shutter button half way to get a light meter reading, repeat until you get a green light, and then fire.  Considering she is not really a photo buff, this theory really didn’t pan out, and back to dad’s camera bag it went.  A bit later on the camera developed this strange mirror and film advance jam problem.  For years the mirror was stuck up and the film advance lever was stuck.  No matter what we did, it just stayed stuck.  It was dormant for 3 decades, going through moves from Springfield to Kansas City to Washington and back to Springfield again, with all the temperature changes you’d expect being in those meterologically tempurmental places. Until one day, I found it on the shelf at their house and slammed it really hard against my hand. It let out a loud thump, the mirror retracted and since then it was worked perfectly without incident. The only other thing I had to do was remove the corroded battery and replace it with two fresh LR44 batteries. To my surprise even the battery contacts were shiny and clean, even though the battery itself was rusty.

Unlike its older siblings the Spotmatic and K1000, this camera is actually compact and light, despite using a lot of metal in its body.  If one were to mount a pancake lens to it, it’d probably fit in a coat pocket.  The zoomed in picture shown shot on my iPhone actually makes it look bigger than it is. I also like that the light meter uses LEDs rather than an analog needle – in situations where light is not the best, it’s much easier to see. It’s also the first Pentax I have encountered (though by  no means the first of this type to be produced) with the bayonet style “K-mount” lens, which is easier to work with than the older M42 “screw-mount.”  Although, the M42 is not without its own charm.

Since my camera is loaded right now, I did not want to open it up.  I am using a page from the owner’s manual here to show film loading.  As can be seen, the film leader can go anywhere in between the white plastic rods.  This makes loading much easier than the earlier style cameras which use a single slot on the take-up spool. 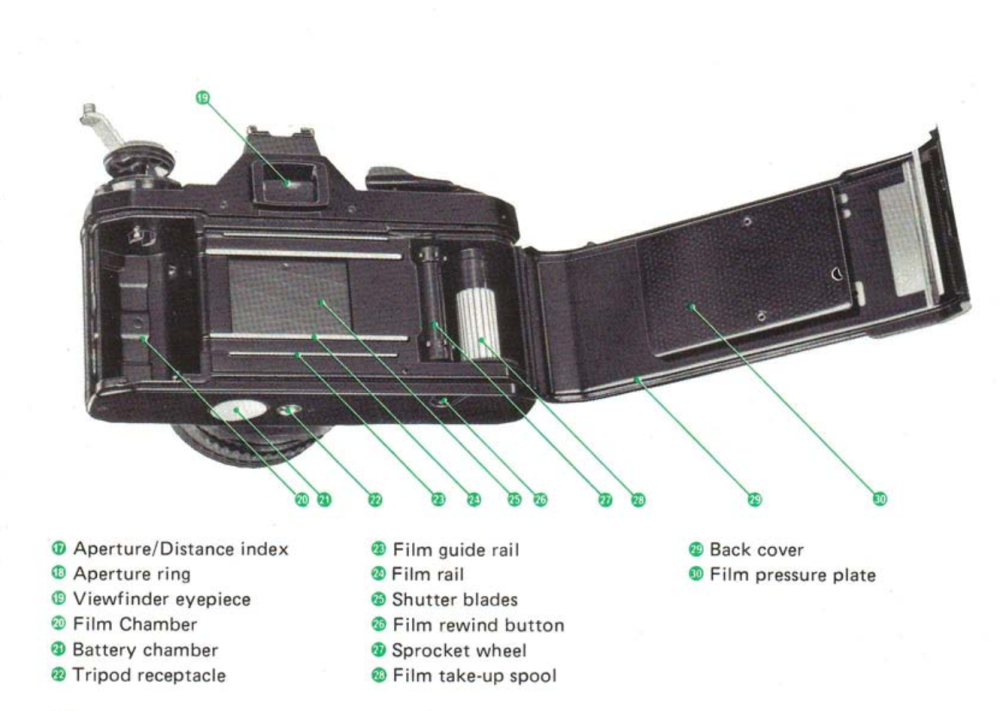 Unlike its older siblings in the Spotmatic and “K” series, this camera is not entirely mechanical.  If the batteries are dead, it will only function at a shutter speed of 1/125 and you have no meter. If you’re out in the sun and you’re using 100-speed film, perhaps you can use the classic “f/16” rule and be okay.  Fortunately, it uses very little power and the two LR44 batteries, easily available at any retailer that sells batteries (in my case Wal-Mart).  If you read the Pentax forums, you will find that most people report that batteries in the majority of these cameras last a freakishly long time.

Overall impression – it gives you that “retro experience” without the heavy weight.  The  lens is nice and sharp.  This camera goes from $9.99 US all the way to $99.99 US and it is quite good if you really aren’t interested in all the manual functions and just want to try your hand at a bit of film on the cheap.

A photographer of both film and digital, IT professional, Star Trek fan and heavy metal junkie. View all posts by Chris Moore